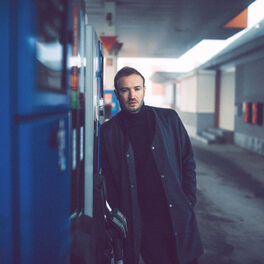 10 Years With InFiné by Vanessa Wagner

Chamberlain : Scenes of exploration Mathieu Harlaut has always had the audacity to push his curiosity to its logical conclusion, conjuring up unique sonic spectres. Verging on strange, these apparitions aggregate a myriad of influences and approaches combining DIY, scholarly appropriation and pop arrangements. Chamberlain, his alias, embodies the project, where classical, jazz, electro and soundtracks merge to form innovative musical compositions. Chamberlain’s vision emerges as he takes these diverse territories to create completely new landscapes. Evocative postcards of journeys to come. A present where influences and inspirations offer up the ideal framework for creating new horizons. With his characteristic attention to detail, Chamberlain is a skilled craftsman and an alchemist in turns. With him there is no apparent "timeline". No welded joints. No stiches. The overall impression of Chamberlain's music is enveloping, finding just the right points of balance and energy to evoke a particular atmosphere. But it doesn’t diffuse atmosphere, it’s more like an ambient perfume. Chamberlain's tracks are like the many notes of a fine fragrance, infusions that elicit subtle and contrasting emotions. Be it the music lover's indulgent solitude or the sensory exultation of a shared club experience. Chamberlain took his time. No doubt the price you pay for self-assurance and high standards. His musical capital has been built up through the interactions he has always deftly brought about. He has a knack for intuition, connections, knowing when to make the call. His artistic journey encounters a wealth of humanity and countless contrasts, including the widow of a farmer-pianist, a cutting-edge cousin, progressive conservatories, the countryside and the city. Private interiors and big screens. Collectives and this solo project taking great shape. Labels and concerts. The day and the nights. In his work, minimalism is not opposed to abundance of detail. Instead of crystallizing, fossilizing, it forms a fertile substratum. Like chamber music or Berlin minimal techno, Chamberlain practices a form of musical oulipo. Constraint becomes a creative reference, a part of the game. Intellectual exploration doesn’t preclude groove, radical elements are allowed without clashing against the frontal cortex. Entertainment in all its diversion, digression. Transgression. Here's the picture: Maurice Ravel, Erik Satie, Claude Debussy, Gabriel Fauré, Steve Reich, Max Richter...contrasting alongside Aphex Twin, Maurizio, Moodymann and, of course, the free jazz improvisation of Brad Mehldau. Get it? Perhaps we could add the film composer greats such as Ennio Morricone or François de Roubaix? And why not a new Arthur Russell ? Enough with the references. It's not so much where Chamberlain comes from that matters, but where he takes us. Over yonder, neither going backwards nor treading water, to a kind of high plateau that could be Langres. This is no untamed rave, instead the musical pigments are full of meaning. The house sound beats in the temples, warms the earlobes and opens the mind. A place where memory, emotions and creativity are at play. And of course, curiosity.