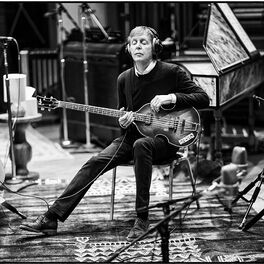 Flowers In The Dirt (Remastered)

Flowers In The Dirt (Archive Collection)

Hope For The Future

Kisses On The Bottom - Complete Kisses

Kisses On The Bottom

Liverpudlian Paul McCartney began his musical career in a band called The Quarrymen with John Lennon. George Harrison joined the band shortly after, followed by Lennon's friends Stuart Sutcliffe and Pete Best and settled on the name change to The Beatles. When Sutcliffe and Best left, McCartney took over duties on bass and they recruited Ringo Starr to take to the drums. Although only together for ten years, The Beatles quickly became one of the biggest bands in the world, releasing 23 studio albums - including the number ones 'A Hard Day's Night', 'Help!', 'Rubber Soul' and 'Revolver' - and 63 singles, of which 26 earned them top ten positions in the UK charts.

When The Beatles officially split at the end of 1970, Paul McCartney wasted no time in moving on to the next phase of his career. As co-writer and lead singer on many of the classic Beatles hits, his songwriting was already famed and he quickly came out with two solo albums, 'McCartney' and 'Ram'. Anxious to experience the thrill of live performance again, he formed the band Wings with his wife Linda, ex-Moody Blues guitarist Denny Laine and drummer Denny Seiwell and, while the personnel changed over time, Wings were hugely successful in their own right with one of the biggest UK hit singles of all time with 'Mull of Kintyre' in 1977. After they split in 1981, McCartney collaborated with various other artists including Michael Jackson, Stevie Wonder and Elvis Costello and experimented with classical, electronica and film music, but continued to write, record and perform his perfectly crafted pop.