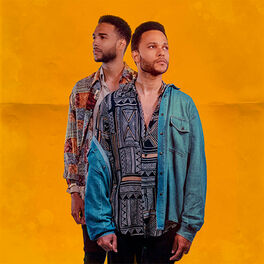 Calema is a duo composed of two brothers from São Tomé, António and Fradique who has already been viewed more than 100 million times on YouTube and has given more than 100 concerts in 12 countries over the last year. Calema is the musical phenomenon of the last 2 years, both in Portugal and abroad. Fradique and Antonio, who have five years of difference, have turned an improbable dream into reality and are reaching out to a wider and wider audience with the main message that believing is the key to making everything possible. Their first original album, "Bomu Kêlê", was produced by the most influential label of Portugal, Klasszik. The release of the second "A Nossa Vez" is an authentic success! The eponymous single is seen in 2017 as the most popular Portuguese-language song on national social networks. During a huge tour, which went through Portugal they had the opportunity to perform in the most popular festivals in Portugal, such as "Sol da Caparica" and "Expofacic". The highlight was the sold-out concert in Portugal's most iconic venue: the Lisbon Coliseum. The next two 2018 concerts will take place at the Coliseum in Porto on November 10th and Campo Pequeno Arena in Lisbon on December 7th. In 2019 Calema will perform in London, Luxembourg and Paris in the legendary hall of Olympia on May 7, 2019. These concerts promise to be unforgettable for the two brothers, as well as for the fans who look forward to them.