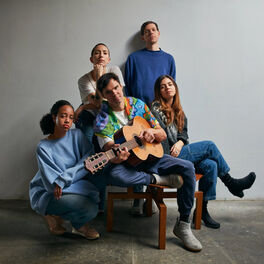 Stay at Home with Jungle

Dirty Projectors were the concept of Brooklyn's Dave Longstreth as a vehicle for his uniquely individual songwriting and experimental rock ideas. A prolific former Yale student, he left college to concentrate on music, making his lo-fi first album The Graceful Fallen Mango on a four-track recorder, full of mournful and slightly eccentric melodies and lyrics. By his next album The Glad Fact in 2003 Longstreth was working with Adam Forkner and had adopted the name Dirty Projectors. His ideas became increasingly ambitious, resulting in the 2005 album The Getty Address, which has been described as a "glitch opera" about Don Henley of The Eagles featuring 25 musicians, including vast orchestral interludes and choral arrangements. Longstreth's unpredictable course continued with 2007's Rise Above, a collection of Black Flag songs, on which he shared vocals with Amber Coffman and Susanna Waiche (later replaced by Angel Deradoorian). In 2009 they released the Bitte Orca album and collaborated with David Byrne and Germaine Greer on the song Knotty Pine, and also worked with Björk on Mount Wittenerg Orca for a charity project.