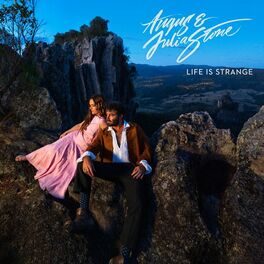 Music To Paint To

Angus & Julia Stone are a sibling singing/songwriting duo whose music spans intimate folk and dreamy indie pop. Growing up on the northern beaches of Sydney, the Stone siblings were schooled in pop music at an early age by their father, who played in a local cover band. The duo released an EP of early material, Chocolates & Cigarettes, before moving to London in 2006. The twosome recorded their entire second EP, Heart Full of Wine, at the residence. Angus & Julia Stone's debut album, A Book Like This, was released in 2007 and charted in the Top Ten in Australia. Two years later the group returned with Down the Way. A breakthrough success for the duo, the album debuted at number one in Australia, and earned them five ARIA music awards. On the heels of this success, the siblings abandoned work on a follow-up, opting instead to pursue solo work. In 2014, the siblings finally reunited for their third studio album, the Rick Rubin-produced, eponymously titled, Angus & Julia Stone. Angus & Julia Stone teamed up again for their fourth studio LP, 2017's Snow. The first notes of Snow are instantly transporting. The guitar is a scratchy, wooden memory laid over a moment of silence. The gently driving organ beat emerges and takes you with it, beginning the next enchanting journey with brother-sister duo, Angus and Julia Stone. "Snow is both of us," Angus says of the title track and first single from the fourth Angus & Julia Stone album. "We sat down and wrote it together."