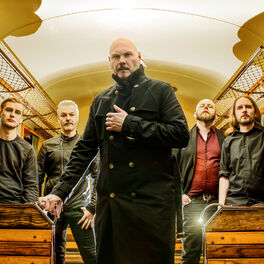 Live in the Heart of Helsinki

Sworn to a Great Divide

Hard-hitting Swedish death-metal overlords Soilwork growled their way into the hearts of hard rock fans in the mid-1990s, gaining a worldwide reputation as experimental innovators and ferocious live performers. Formed by front man Björn Strid in Helsingborg, Sweden, the band's mix of icy Scandinavian mood swings with the fierce speed of Pantera and the melodic breaks of Judas Priest was championed by Arch Enemy guitarist Michael Amott and debut album 'Steelbath Suicide' (1998) made them key players on the country's vibrant metal scene.

After extensive touring, their cult status grew and they broke into the American market with extensive touring and albums 'Figure Number Five' (2003) and 'Stabbing the Drama' (2005), although 'The Panic Broadcast' (2010) brought them their greatest success, making them firm heavy metal favourites. They toured with Fear Factory, Anthrax and Killswitch Engage and in 2013 released the double album 'The Living Infinite' followed by 'The Ride Majestic' in 2015, greatest hits 'Death Resonance' in 2016 and 'Verkligheten' in 2019.