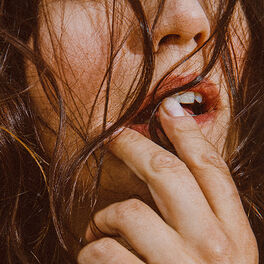 French actress, singer and guitarist Izïa Higelin is better known by her stage name Izia. Daughter of famous French singer Jacques Higelin, she knew from an early age that she wanted to be a musician. She performed as a singer with her father accompanying her on piano from the age of seven, and by the age of 13 had become interested in rock music and written her first song. She met bassist Antoine Toustou through her father and began performing live shows with him in 2004. She left school at the age of 16 to concentrate on her musical career and in the same year performed at an Iggy Pop concert at the Printemps de Bourges Festival, where she began to attract the public's attention as a performer. Her self-titled debut album 'Izia' was released in 2009. Supported by a band consisting of guitarist Sébastian Hoog, bassist Arnaud François and drummer Grégory Jacques, she embarked on a tour to promote the album. The album reached number 31 in the French Albums Chart. In 2009, she released the single 'So Much Trouble' which charted in the top 100 of the French Singles Chart, and was included in her second album also named 'So Much Trouble', released in 2011, which reached number ten in the French Albums Chart.