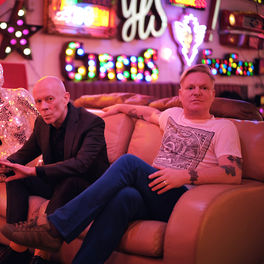 Hey Now (Think I Got A Feeling) (Remixes)

I Could Fall in Love With You

Love You to the Sky (Remixes)

Keyboard wizard Vince Clarke had already proved himself as a songwriter with the magic touch with a series of hits for Depeche Mode and Yazoo when he advertised for a singer to work with him on a new project in 1985. His advert was answered by Andy Bell and Erasure were on their way. Clarke's synth-driven dance rhythms and catchy tunes, allied to Bell's colourful voice and camp personality, cracked the UK top ten with their fourth single 'Sometimes'. They subsequently released a string of classic dance hits like 'A Little Respect', 'Stop' and 'Love to Hate You', while their Abba tribute EP 'Abba-esque' hit number one in 1992, not only triggering a rediscovery of Abba, but establishing Bell as a gay icon and taking Erasure to a new level of popularity. In 2005 Bell released his first solo album but in 2009 he was back with Clarke recording a new Erasure album. The record, 'Tomorrow's World', was released in 2011 and broke the top 30 in the UK Albums Chart. They embarked on an international tour to promote the album and their comeback and, off the back of their renewed popularity, they released Christmas album 'Snow Globe' in 2013. Their 16th studio album 'The Violent Flame' was released in 2014 and gave the duo their first top 20 record in more than a decade. Their 17th album, 'World Be Gone', was released in 2017 which they quickly followed with 'World Beyond', a re-recording of 'World Be Gone' in a post-classical style and 'World Be Live' a live document of their recent tour. The band's latest album is 'THE NEON' and will be released on August 21st, 2020.