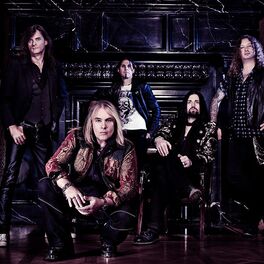 Gambling with the Devil

Keeper of the Seven Keys: The Legacy

Straight Out Of Hell: Premium

Straight Out Of Hell

Keeper of the Seven Keys, Pt. I (Expanded Edition)

Keeper of the Seven Keys, Pts. I & II (Deluxe Edition)

One of the loudest, fiercest European metal acts of the 1980s, Helloween's breakneck shredding and thunderous riffs helped define the sub-genre of power metal and won the adoration of hard rock fans across the world. Formed in Hamburg, Germany in 1984, the band took inspiration from Judas Priest and Black Sabbath and created a bombastic sound based on Michael Weikath's blistering guitar playing and Michael Kiske's high-pitched, melodic voice. Early albums Keeper Of The Seven Keys, Part 1 (1987) and Part 2 (1988) won support from MTV and took the group from a cult audience in their home country to world tours, support slots for Anthrax and Iron Maiden and a triumphant performance at the UK's Monsters of Rock festival at Castle Donington. They were signed up by major label EMI, but the departure of guitarist Kai Hansen, a lengthy legal battle with their former record company and the later suicide of drummer Ingo Schwichtenberg halted their progress. When Kiske was replaced as front man by Andi Deros, the band returned to form for the acclaimed The Time Of Oath (1996), Better Than Raw (1998) and The Dark Ride (2000). Continuing to record and perform through the 2000s, the band has notched up album sales of over five million and are widely respected as key figures and defining influences in the Euro-metal scene.