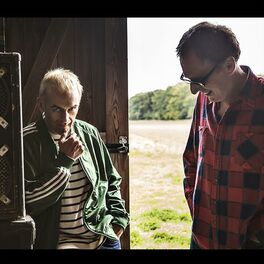 A State Of Trance Classics

With a little help from its use in the 1995 film 'Trainspotting', the soundtrack single 'Born Slippy .NUXX' from Underworld shot the electro trio to number two in the UK charts in 1995. A huge club anthem and radio hit, the track was originally a remix of the earlier unsuccessful single 'Born Slippy' that was picked up and used in Danny Boyle's cult classic.

Karl Hyde and Rick Smith started making music together in the early 1980s as a guitar-based electro/new wave outfit before teaming up with Essex DJ Darren Emerson in 1991 and becoming big names on the techno scene thanks to the acclaimed album 'dubnobasswithmyheadman' in 1994. Buoyed by the success of 'Born Slippy .NUXX', their 'Second Toughest in the Infants' album was nominated for the 1996 Mercury Music Prize and its follow-up 'Beaucoup Fish' (1999) peaked at number three in the UK Albums Chart. Emerson left the band in 2000 but Underworld's reputation as ground-breaking, genre-melding beatmakers continued to attract fans, including Radiohead, Beastie Boys and Paul Van Dyke.

After a short break, the now duo released 'A Hundred Days Off', their sixth album. This was followed by a compilation of previously unreleased single tracks, '1992-2002', and the concert release 'Live in Tokyo' from their 2005 tour. 'Oblivion With Bells' became their seventh album and they worked once more with director Danny Boyle to create the soundtrack to his 2006 film 'Sunshine'. They performed at several European festivals before returning to the studio to record their eighth album 'Barking', which they released in 2010.

In 2012 they were asked to direct the musical elements of the Olympics opening ceremony in London, alongside Danny Boyle. For their work on the Olympics they were named recipients of the Q Award for Innovation in Sound. The following year they worked with Boyle again on his film 'Trance' and his TV series 'Babylon'. They remastered and re-released albums 'dubnobasswithmyheadman' and 'Second Toughest in the Infants' before brand new album 'Barbara Barbara, We Face a Shining Future' dropped in 2016. The album earned them a Grammy Award for Best Dance/Electronic Album in 2017 before they once again teamed up with Boyle for his new released 'T2 Trainspotting'.

In 2018 they revealed plans for a new project titled World of Underworld which saw them re-imagine older music. Their first release as part of the new project was titled 'Brilliant Yes That Would Be' followed by 'Bells & Circles', a collaboration with Iggy Pop.