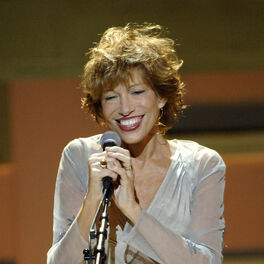 Songs From the Trees (A Musical Memoir Collection)

This Kind of Love

Boys In The Trees

The Best Of Carly Simon

Clive Davis: The Soundtrack of Our Lives

Music From And Inspired By The Miramax Motion Picture Bounce

Will & Grace: Let The Music Out!

by Burt Bacharach, The Houston Symphony

Simon first came to prominence alongside sister Lucy in the Simon Sisters, before releasing her self-titled solo debut album in 1971. The album brought Simon her first solo hit single when That's The Way I've Always Heard It Should Be reached the top 10 in the US charts. Her second album Anticipation was released in 1971 and went gold within two years, as did her third album No Secrets the following year - which featured the Number 1 hit You're So Vain and has Mick Jagger singing backup on the recording. In November 1972, Simon married fellow artist James Taylor, who also sang on the top 10 hit Mockingbird, from Simon's fourth album Hotcakes. Her theme tune to the movie The Spy Who Loved Me (1977) Nobody Does It Better became a massive hit but, after collapsing on-stage with exhaustion in 1980, Simon moved away from performing and found success with film themes Coming Around Again from Heartburn and Let The River Run from Working Girl. After a brief recording hiatus, she released Letters Never Sent in 1994 which failed to make a mark on the US album charts. She disappeared again from the music world when diagnosed with breast cancer in 1997, but returned as a singer-songwriter on The Bedroom Tapes in 2000 and continues to release a mixture of new and retrospective albums including 2009's Never Been Gone.