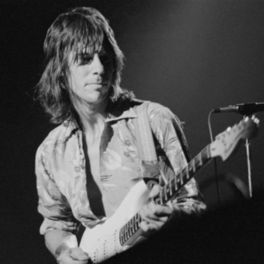 Live at the Hollywood Bowl

Live and Exclusive from The Grammy Museum

You Had It Coming

The World Of Pavarotti

The Blues Is Alive And Well

One of Britain's greatest guitarists, credited with introducing fuzz, feedback and distortion into rock music, Jeff Beck learned to play as a teenager, originally building his own guitar from cigar boxes. His career began in the 1960s as a session guitarist and, on the recommendation of Jimmy Page, was recruited as Eric Clapton's replacement in The Yardbirds, playing a key role in some of their biggest hits such as Heart Full Of Soul, I'm A Man and Shapes Of Things. In 1967 Beck recorded his most famous solo song, Hi Ho Silver Lining, which was never a major hit but became an obligatory ingredient of late 1960s clubs and parties. The first Jeff Beck Group line-up included Rod Stewart and Ronnie Wood when Beck's increasingly ambitious experiments with guitar technology paved the way for heavy metal, while producing two albums, Truth in 1968 and Beck-Ola in 1969. Internal disputes led to the group's split in the summer '69 after which Beck formed a new band adopting a more soulful style, including bassist Tim Bogert and drummer Carmine Appice. The three of them subsequently formed the power trio Beck, Bogert & Appice who became a major live attraction before splitting in 1974. Ill-health limited his subsequent work, although he still made sporadic recordings and live show appearances which proved his groundbreaking skill remained undiminished. In 2009 Beck embarked on a world tour and was inducted into the Rock And Roll Hall Of Fame. The following year he released a brand new album, Emotion & Commotion, which featured a combination of new songs and covers including his takes on Over The Rainbow and Nessun Dorma, the latter of which earned him a Grammy Award for Best Pop Instrumental Performance. Beck joined up with Brian Wilson in 2013 to record the Beach Boy's latest solo offering, as well as touring together around the US. 2014 saw the start of another world tour for Beck, followed by a performance with Joss Stone at the Royal Albert Hall in London.