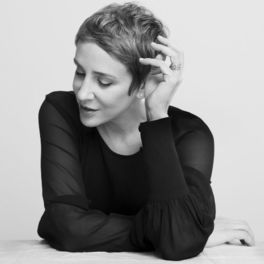 Songs From Other Places

I Know I Dream : The Orchestral Sessions (Deluxe Version)

What the World Needs Now Is Love

It's A Wonderful World

Love Is... The Tender Trap

Only Trust Your Heart

Stacey Kent is a jazz singer in the mould of the greats, with a legion of fans worldwide, a host of honors and awards including a Grammy nomination, album sales in excess of 2 million, Platinum, Double-Gold and Gold-selling albums that have reached a series of No. 1 chart positions during the span of her career. Her most recent album, I Know I Dream: The Orchestral Sessions (Sony) has had more than 35 million streams, received glowing reviews, including a coveted five stars in Downbeat, won ‘Album of the Year’ in the vocal category at the 2018 Jazz Japan Awards, and was described by All About Jazz as “intoxicating understatement at its finest…one more jewel in a discography with many, it’s one that deserves singling out for its luster.” This comparative literature graduate with a passion for music, travelled to Europe to further her studies, and after receiving her degree from Sarah Lawrence College in NY, through a series of twists of fate, she found herself in London where she enrolled in a graduate music program at the Guildhall School of Music and Drama, where she met her future husband and musical partner, Jim Tomlinson. Kent’s musical journey began in her childhood with piano lessons. A keen ear and true voice lead her to search out opportunities to express her love of music. However, nothing suggested the shift from the academic path to the path that propelled her to international recognition as one of the foremost jazz singers of her generation. With a catalogue of 11 studio albums, including the Platinum-selling, Grammy-nominated Breakfast On The Morning Tram (EMI/Blue Note 2007) and an impressive list of collaborations, Stacey has graced the stages of more than 55 countries over the course of her career. Kent paid her dues in the jazz clubs of London, before releasing the first of a series of albums for the Candid label, beginning with Close Your Eyes in 1997. Her second album, The Tender Trap (1999) brought her to the attention of US audiences with appearances on CBS Sunday Morning and NPR’s All Things Considered. Albums and awards followed, with Stacey winning the ‘Jazz Vocalist of the Year’ at the BBC Jazz Awards. The Boy Next Door (2003) was Stacey’s last Candid release and her first album to achieve Gold status. During this period, Stacey cemented her reputation as a singer capable of putting a distinctive stamp on an impressive repertoire of standards. Her ability to communicate emotion through a nuanced and minimalist approach was showcased on Jim Tomlinson’s album, The Lyric (Token) which was awarded Album of The Year at the 2006 BBC Jazz Awards. This album brought her to the attention of Blue Note records with whom she signed in 2007. With each successive album, Stacey’s style has become more honed as her artistic outlook has broadened, leading her beyond the Great American Songbook to French chanson and Brazilian music which form an ever-larger part of her repertoire. Stacey’s repertoire also includes a growing number of songs written for her by Jim Tomlinson with various lyricists, most notably the Nobel Prize-winning author, Kazuo Ishiguro. The idea of singing original compositions came up during a lunch with Ishiguro. The conversation turned to music, and the idea was hatched to write a series of songs for Stacey that distilled themes of memory, travel and love, that so frequently surfaced in her repertoire. From this conversation, the songs for Breakfast On The Morning Tram were conceived. Almost overnight, Stacey transformed from being a singer of the Great American Songbook, to a singer with a highly distinctive and personal repertoire. The first collaboration between Ishiguro, the lyricist, and Tomlinson, the composer, The Ice Hotel, won first prize in the jazz category of the International Songwriting Competition. Since then, all of Stacey’s albums have been punctuated by original songs composed by Tomlinson with a variety of lyricists in English, French and Portuguese. Kent has continued to pursue a frenetic recording and touring schedule. Her first album for Blue Note was followed in 2009 by the Gold-selling, all-French, Raconte-Moi which was that year’s biggest selling French language album outside of France. She was invited to perform an all-French program at the Francofolies Festival and was awarded the Chevalier Dans L’Ordre Des Arts et Des Lettres. Her first ever live album, Dreamer In Concert (EMI 2011), was followed by The Changing Lights (Warner 2013), which more than any other album, reveals the ever-present influence of Brazil in Stacey’s music. Among French, Italian and German, Stacey also speaks Portuguese. She has toured widely in Brazil and collaborated with many of her heroes including Edu Lobo, Dori and Danilo Cayymi, Roberto Menescal, and most notably Marcos Valle, who invited her to celebrate his 50 years in music on the album, Ao Vivo (Sony 2013). A DVD and documentary of their collaboration and friendship was also released on Sony in 2016. With Roberto Menescal, Stacey recorded Tenderly (Sony), an intimate collection of standards that showcases her crystalline voice and Menescal’s warm guitar. Jazzwise Magazine referred to the album as “an extremely beautiful meeting of minds” It is Menescal’s only full album as a jazz guitarist and demonstrates the debt he owes to the great Barney Kessel. As Kent’s first standards album in a decade, it shows her increasingly impressive and maturing interpretative gifts. Whilst the COVID 19 pandemic has put Stacey’s concert appearances on pause, she has been busy recording from home and staying in touch with her fans through social media. She has recently released several recordings including Bob Marley’s Three Little Birds and Bill Wither’s Lovely Day, with messages of hope for these troubled times, as well as the EP, Christmas In The Rockies (Token 2020), and Stacey is also currently releasing a series of singles with her long-standing accompanist, Art Hirahara, entitled Songs From Other Places, which will include, among others, new original songs from Jim Tomlinson & Kazuo Ishiguro. Her forthcoming studio album, Summer Me, Winter Me, is now planned for release in the fall of 2021.