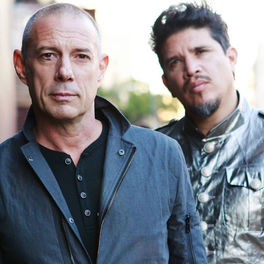 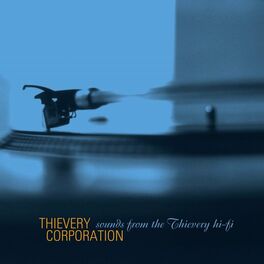 Sounds From The Thievery Hi-Fi

Treasures from the Temple

It Takes A Thief

The Richest Man In Babylon

Sounds From The Thievery Hi-Fi

Ibiza - The Sound Of Renaissance - Volume 4

Since debuting in the mid-'90s, Washington, D.C.'s Thievery Corporation have remained one of the most popular acts associated with chilled-out, lounge-friendly electronic music. Initially known for making abstract, instrumental, midtempo dance music whose classification fell somewhere between trip-hop and acid jazz, their sound expanded to include vocalists and live instrumentation on 2000's The Mirror Conspiracy (their most popular album in the United States), which was heavily influenced by bossa nova and soul. Their albums from 2002's The Richest Man in Babylon onward have become increasingly more political, reflecting their antiwar, pro-humanity stance in addition to their appreciation for all of the world's cultures. Likewise, their music has explored several additional influences and genres, including Indian classical, hip-hop, and reggae. Following the dark psychedelia of 2005's The Cosmic Game, 2008's Radio Retaliation was a protest album incorporating styles such as Afro-beat and go-go, and the Jamaica-recorded The Temple of I & I was devoted to dub and reggae. Featuring the production skills of Rob Garza and Eric Hilton, Thievery Corporation released several warmly received singles on their own Eighteenth Street Lounge (ESL) label (named after their own Washington, D.C. bar and nightclub) in 1996. Although previously known primarily among acid jazz and rare-groove DJs, the group shot to minor celebrity when a track from one of their early 12"s appeared on respected DJ/producers Kruder & Dorfmeister's mix session for Studio K7's DJ-Kicks series. Similar in many respects to that Viennese production duo, Thievery Corporation subsequently grew in popularity among a wider audience of DJs and headphonauts. The duo's debut LP, Sounds from the Thievery Hi-Fi, initially appeared in 1996 before seeing wider release the following year, along with a compilation of Washington, D.C.-based electronica artists titled Dubbed Out in DC (both albums were released by ESL). After signing with the British 4AD label, Thievery Corporation began to work on their second LP but were forced to postpone its release date after tapes were stolen in a mugging. The stopgap remix compilation Abductions & Reconstructions was released in 1999, as was the duo's DJ-Kicks installment. Their second proper album, The Mirror Conspiracy, followed one year later. The release featured a greater emphasis on live instrumentation and vocals than their debut, with guest singers including Pam Bricker and Bebel Gilberto. The duo's growing fame made them a natural choice to select tracks for the 2001 Verve compilation Sounds from the Verve Hi-Fi, which contained vintage Latin jazz and bossa nova cuts from the '60s and '70s. They returned to their own work in 2002 with The Richest Man in Babylon, their first album to inject a message of protest into their music, which featured guest vocalists such as Emiliana Torrini and Shinehead. The mix album Outernational Sound and remix EP Babylon Rewound both appeared in 2004. That same year, the track "Lebanese Blonde" was featured in the highly successful Garden State soundtrack, which later won a Grammy Award. Released in 2005, the darker, more psychedelic full-length The Cosmic Game featured guest vocalists Perry Farrell, the Flaming Lips' Wayne Coyne, and David Byrne, and the remix compilation Versions followed in 2006. As election season approached, Thievery Corporation released the politically minded studio effort Radio Retaliation in September 2008. Featuring a guest appearance from Mr. Lif, Culture of Fear arrived in 2011 and mixed social commentary with dub tracks. Their 2014 release, Saudade, turned their music in a different direction, being a bossa nova-based effort with guest vocalists like LouLou Ghelichkhani, Karina Zeviani, and Elin Melgarejo. For their eighth studio album, 2017's The Temple of I & I, the duo temporarily relocated to Jamaica, where they could fully channel their dub/reggae influences into the recording process. The following year, more tracks from their Jamaican sessions emerged -- these were collated alongside various remixes for their 2018 companion album, Treasures from the Temple. ~ Sean Cooper, Rovi