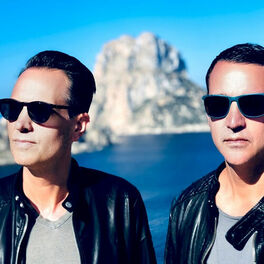 Mind of the Wonderful (All Mixes)

The Singles (The Hitmix by Oliver Momm)

Beyond Time (All Mixes)

by Blank & Jones with Steve Kilbey

by Blank & Jones with Jason Caesar

by Blank & Jones with Cathy Battistessa

by Blank & Jones with Mike Francis

by Blank & Jones with Jason Caesar

Blank & Jones have been hugely important in the history of electronic music. They started in 1997 with their debut „Sunrise" and were one of the main originators of trance music with artists like Tiesto and Paul Oakenfold. During their carreer they never knew any musical boundaries and worked with famous pop stars like Robert Smith (The Cure), Bernard Sumner (New Order), Sarah Mc Lachlan, Pet Shop Boys, Boy George, Deep Forest and Keane to name just a few. Their sound evolved with the years and so did their worldwide success. To date they released 20 artist albums, which all charted in the sales charts and cover such various styles like Electronica, Ambient, Lounge, Pop, Trance, Jazz, Modern Classical and Dance Music. Their great variety is also proved by the highly acclaimed compilations like "so8os [so eighties]" which pay tribute to the original club mixes of the 80s, or "Milchbar" and "Chilltronica" where they bring the listener new soundscapes of downbeat music. 2016 saw another true career highlight, when they were asked to compose and perform music for the world’s largest Gothic church, the Cologne Cathedral (Dom). Their shows brought over 50.000 listeners on three nights to the Dom and it was critically acclaimed as one of the cultural highlights in more than a decade. 2017 was another super busy year for Blank & Jones: David Guetta & Robin Schulz asked them to remix their new single „Shed A Light“ and they also returned in spring with a full electronic album called #WhatWeDoAtNight. The first club music since 8 years and it can be best described as „Adult Electronica“. The true highlight of 2017 was the release of the tenth installment of their „RELAX" artist album series which started in 2003. In 2007 Blank & Jones also founded their own company SOUNDCOLOURS which controls the worldwide master and publishing rights of all their recordings worldwide and let's them act completely independent.