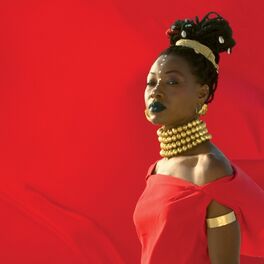 Fenfo (Something To Say)

At Home (Live in Marciac)

One of the most highly rated modern African singer-songwriters for her inventive style and fearless approach, Fatoumata Diawara was originally a child actor. Born in the Ivory Coast to Malian parents, she is one of eleven children and was sent to live with an aunt in Bamako, Mali at the age of nine. Her initial passion was acting and after early stardom in Mali, she defied her family and ran away to France in her teens to pursue her acting career with the Royal de Luxe theatre company. It was in Paris that her instinct for music took over and she became a backing singer with the great Malian star Oumou Sangare.

She subsequently met producer Nick Gold of World Circuit Records, most famous for his work with the Buena Vista Social Club, and Gold became an influential guide as her music career took off in earnest. Gold encouraged her to explore her Malian roots as she blended the Wassoulou language tradition of her spiritual home with more modern styles and she caused quite a stir with the boldness of her subject matter, her song-writing even tackling matters as sensitive as war, abandoned children and female genital mutilation. As a result, her 2011 debut album 'Fatou' - which included a tribute to her mentor Sangare as well as contributions from kora player Toumani Diabate drummer Tony Allen and Led Zeppelin bassist John Paul Jones - swiftly established her as a major new star on the world music scene.

She went on to tour the world, appear at festivals, get involved in social causes and played with the likes of Damon Albarn, Rokia Traore, Baaba Maal, Amadou & Mariam and The Noisettes on the African Express Train tour. She also joined forces with Cuban jazz pianist Robert Fonseca while maintaining her love of acting and cinema, notably in the Academy Award-nominated 2014 movie 'Timbuktu'. The range of her styles continued on her 2018 album 'Fenfo' - translated as 'something to say' - featuring cellist Vincent Segal with tracks ranging from funk to blues, Afro-pop and folk, including some English language material.