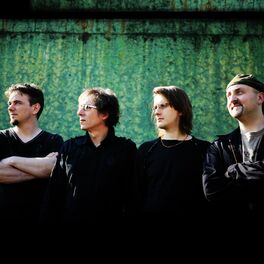 Started in 1987 by Steven Wilson as a jokey homage to his boyhood heroes Pink Floyd, Porcupine Tree gradually developed its own character and eventually eclipsed his main band of the time, No-Man. Wilson invented a suitably bizarre back story for the band with a comic persona for each band member as they tried to pass themselves off as lost 1970s psychedelic legends when releasing their first cassette, Tarquin's Seaweed Farm. Fusing dance and rock, their 1993 album Up The Downstair won them a bigger audience and they started touring for the first time, resulting in the expansive, progressive album The Sky Moves Sideways in 1995. This helped establish the band in the US and they finally hit the mainstream in 1996 with Signify. Sophisticated string arrangements marked their Lightbulb Sun album (2000) and, with Gavin Harrison replacing drummer Chris Maitland, Porcupine Tree achieved their biggest success with the In Absentia album in 2002. They had a rare hit single in 2005 with Shallow from the filmic Deadwing album and their ambitious Fear Of A Blank Planet album (2007) - inspired by the Bret Easton Ellis novel Lunar Park - included guest appearances by Rush's Alex Lifeson and King Crimson's Robert Fripp. The group released their 10th album The Incident in 2009. Artist biography compiled by BDS/West 10. All rights reserved