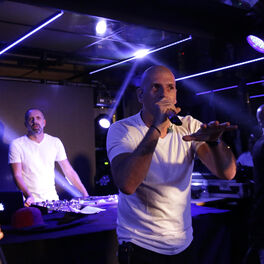 IAM was one of the first hip-hop acts making music in France, releasing the first ever rap album in their home country and spearheading the genre's spread.

The group's roots stretch back to the New York of the early '80s, when IAM founding member Philippe Fragione (then known as Chill, now going by Akhenaton) was making regular visits to the city and getting to know its hip-hop scene. He began making music back in his home town, Marseille, with Eric Mazel (DJ Khéops) and Geoffroy Mussard (Jo, then later Shurik'n). When they were joined by Pascal Perez (Imhotep) and MCs François Mendy (Kephren) and Malek Brahimi (Freeman) the crew began making music under the moniker IAM.

In 1990 demo recordings featuring the Egyptian influence that would become their hallmark began circulating and the group ended up opening for Madonna on her Blond Ambition World Tour. Their first album - and the first ever rap album by a French act - followed in 1991 with the name, '...De la Planète Mars'. Their sophomore effort appeared in 1993 and when the song 'Je Danse le Mia' got extensive radio and club play IAM began using their newfound platform to discuss their political views.