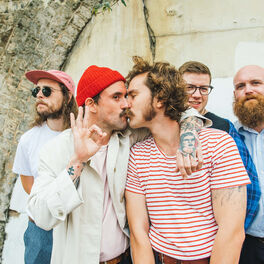 Joy as an Act of Resistance.

Capturing an angst and disillusioned fury provoked by years of recession and austerity, Bristol five-piece Idles introduced themselves as a fireball of snarling, agitated, post-punk rage with their debut album 'Brutalism' in 2017. Front man Joe Talbot and bass player Adam Devonshire met at the University of West England and ran local club nights in Bristol before becoming fed up with the wave of indie acts plaguing the UK music scene at the time and deciding to form their own band in 2012.

Inspired by the likes of SUUNS and Metz, they settled on a regular line-up with guitarists Mark Bowen and Lee Kiernan and drummer Jon Beavis a couple of years later and went on to release early EPs 'Meat' and 'Meta' in 2015. They struggled for years to find a true identity, but the death of Talbot's mother after a long illness gave him and the band a sense of clarity amid their grief; she is pictured on the cover of 'Brutalism', a record full of unhinged rants, scuzzy, wired riffs and explosive intensity.

Known for their sneering takedowns of middle-class and right wing authority, they toured with The Maccabees and Foo Fighters before second album 'Joy As an Act of Resistance' in 2018 became a more visceral outpouring of emotion and anger.