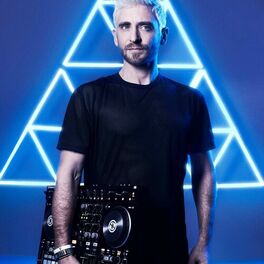 When The Sun Goes Down

Say You Do (Remixes)

Say You Do (Radio Edit)

Hot For Me Now

From hosting pirate radio shows and underground raves to chart-topping hits with Rita Ora, DJ Fresh is an important and influential figure on the UK dance scene through his evolution into jungle, drum & bass and dubstep.

Born Daniel Edward Stein in Worthing, Sussex his first introduction to music was through the classical records that his mother played him as a child, and he later became a fan of indie bands like The Cure and The Pixies and discovered acid house, rave and the electronic ambience of Jean Michel Jarre. In the pre-Internet days Stein was also a self-confessed computer nerd, adept at coding and hacking, yet only lasted six months at university studying Business Information Technology before dropping out; he bought his first sampler with his student loan and began hosting pirate radio shows.

He also became a member of the DJ collective Bad Company, started the label Breakbeat Kaos with Adam F and founded the website Dogs On Acid as a hub for the UK dance community, before his 2006 debut album 'Escape from Planet Monday' featured collaborations with Pendulum, DJ Shadow and Neil Tennant. Always at the cutting edge of new trends, his collaboration 'Gold Dust' with Jamaican dancehall singer Ce' Cile was his first big track to cross over from the clubs to mainstream radio and, in 2010, into the charts, while his second album 'Kryptonite' established his reputation for genre-mashing, head-rushing electro bangers with universal appeal.

His success reached new levels when his single 'Louder' was used on a Ministry of Sound compilation and in an advertising campaign for Lucozade and it grew in popularity to become the first ever dubstep track to reach number one in the UK in 2011. He reached the top of the UK charts again when he worked with Rita Ora on the drum & bass hit 'Hot Right Now' and scored another big top ten single when he teamed up with British rap star Dizzee Racsal on 'The Power' before album 'Nextlevelism' landed in 2012 and included guest appearances from Rizzle Kicks, Ms Dynamite and Hollywood actress Juliette Lewis. There was also collaborations with Diplo on the single 'Earthquake', with Ellie Goulding on 'Flashlight' and with Ella Eyre on the storming dancefloor anthem 'Gravity', while Fresh and Adam F celebrated 15 years of their label Breakbeat Kaos with compilation record 'Junglesound: Revenge of the Bass' in 2018.