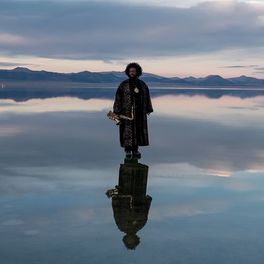 by Everything Is Recorded, SAMPHA, Ibeyi, Wiki...

by Run The Jewels

by Run The Jewels

by Terrace Martin Presents The Pollyseeds

The Comet Is Coming

Shabaka and the Ancestors

The Get Down Netflix Soundtrack

Love Will Find A Way

by Florence + The Machine

by Florence + The Machine

Regarded as a boundary-pushing, genre melding new jazz visionary, saxophonist Kamasi Washington came to wider recognition when he played on Kendrick Lamar's landmark 'To Kill a Butterfly' album and conjured a mesmerising mix of psychedelic, free-form, Afrobeat jazz on his major label debut 'The Epic' in 2015.

Born into a musical household in Los Angeles, his father was a woodwind player who recorded with Earth, Wind & Fire and The Supremes, and after dabbling with keyboards and drums, Washington started playing the saxophone at the age of 13 and discovered the jazz of Art Blakey and John Coltrane. Despite growing up in the tough Inglewood neighbourhood where hip-hop reigned supreme, Washington played with the church gospel groups, while his high school friends Thundercat and Terrace Martin became long-term musical cohorts who played their first major gig together at the Playboy Jazz Festival in 1997.

He also discovered European classical music, Indonesian Gamelan and North Indian classical raga while studying ethnomusicology at UCLA and dreamed-up lofty ambitions of conquering the world of jazz, before learning his trade as a touring member of Snoop Dogg's band and as a session musician for Ryan Adams, John Legend and Chaka Khan.

As part of the West Coast Get Down collective of musicians that began rejuvenating the Los Angeles jazz scene, he led bands and self-released early albums 'The Proclamation' and 'Light of the World' before his old friend Terrace Martin began producing tracks for Kenderick Lamar and brought Washington in to play saxophone on the track 'Mortal Man'. He ended up arranging and featuring heavily on Lamar's US number one albums 'To Pimp a Butterfly' and 'Damn', while Washington's first album for Flying Lotus' Brainfeeder label, 'The Epic' was born out of 30 days of long jam sessions and told the story of his influences, his journey and his future visions in a three-hour odyssey that featured a 32-piece orchestra, a gospel choir and a ten-piece jazz band.

His screaming, psychedelic saxophones, African rhythms, classical elegance, hip-hop swagger and jazz improvisations were condensed into a six-track fusion EP on follow-up 'Harmony of Difference' in 2017, but he returned to big, visionary ideas and attempted to digest his utopian ideals with society's hard-faced realities on 'Heaven and Earth' in 2018.