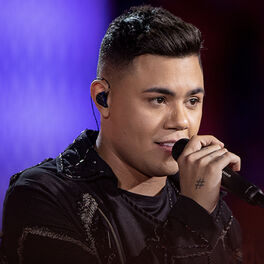 Felipe Araújo is a Brazilian singer and songwriter from a musical family who perform sertanejo music, a form of Brazilian country music. Araújo began his musical life following in these footsteps, but when he was 15 years old, he decided to pursue a career in rock music instead. He formed a duo called Joao Pedro & Felipe in 2012, releasing the single 'Arrocha Com Tequila' before splitting up in 2015. Araújo then formed a new duo with Zé André and released the single 'Noite Fracassade'.

Later in 2015, Araújo's brother Cristiano was involved in a car accident in which he was sadly killed. Felipe then followed his father's wishes for him to perform as a solo artist and released the single 'Come Vocé' in honour of Cristiano and an EP of the same name in 2015.

Araújo started work on a DVD of tracks called '1, Dois, 3 - Vivo' in 2016 and released it in 2017. It featured several additional artists including Jorge & Mateus, Henrique & Juliano and also his father, Joao Reis. Two of the tracks on the DVD were instantly popular on online video streaming channels, 'A Mala é Falsa' reaching over 180 million views, and 'Chave Cópia' reaching over 41 million. His single 'Amor Da Sua Cama' in 2017 which featured artists Carol Nakamura and Felipe Titto reached number one in the Brazilian Singles Chart and had over a million views on the first day of its release.

Araújo's popularity increased even further in 2019 with the release of the album 'Por Inteiro', from which the single 'Atrasadinha' with fellow Brazilian singer Ferrugem has had over 200 million views online.