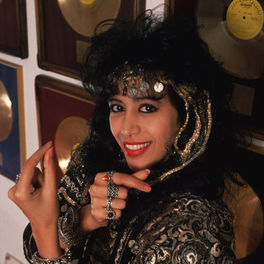 One of Israel's most popular and famous daughters, the singer Ofra Haza made an enormous contribution to Israel's popular music culture during her short life and her music formed an important bridge beween Israeli and Arabic music lovers.

Brought up in the slums of Tel Aviv she was spotted singing at the age of 12 by local impresario Bezalel Aloni and began performing in his productions around the city. After she had completed her mandatory Israeli military service, her voice had matured and she felt ready to launch her professional career. Haza released her first album 'About Our Loves' in 1983 and it yielded a string of radio hits. In 1983 she was chosen as Israel's entry in the Eurovison Song Contest where she came second and from then on her career blossomed, both in the Middle East and around the world.

The singer had numerous platinum and gold albums and by the late 1980s was a regular MTV artist enjoying hits around the world. Her 1988 release 'Shaday' won the New Music Award for Album of the Year and her singles became popular on the club scene. Haza made a number of collaborative recordings with high profile artists including the legendary Don Was, Thomas Dolby, Sarah Brightman and Iggy Pop and her music was regularly featured in movie soundtracks. Her death in 2000 from an AIDS related illness shocked her fans and was the subject of much controversy in her native Israel. She was 42 years old.