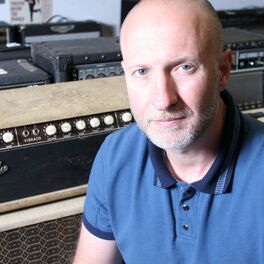 by The Golden Palominos

The American rock guitarist Bob Mould has been called the godfather of indie rock in the US. Shades of his distinctive playing style can be heard in early Foo Fighter songs and he has been cited as a key influence for bands like Pixies and Nirvana. He began his career when he formed Hüsker Dü in the late 1970s teaming up with drummer Grant Hart, bassist Greg Norton and keyboardist Charlie Pine. Hüsker Dü released seven studio albums with their 1984 release 'Zenith Arcade' being considered the best example of their work. They became one of the most highly respected alternative rock bands of their era but unfortunately they were beset by numerous problems relating to drug abuse and personal friction between Hart and Mould and their recording career came to an end in 1987. Mould went on to form Sugar, the band with whom he had his most significant commercial success when their 1992 album 'Copper Blue' sold over 300,000 copies, but after an intense three-year career which saw the band release four critically-acclaimed albums, Sugar disbanded and Mould went solo. He continues to perform and record and has 14 solo albums to his credit.