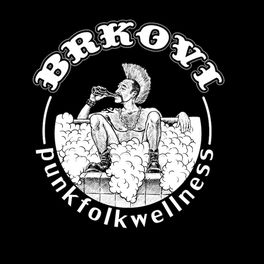 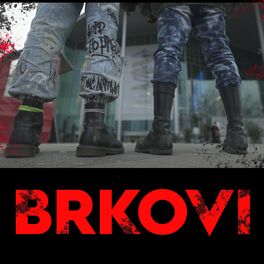 Brkovi, which translates as Moustache, are a punk-rock-turbofolk band existing from 2004 and hailing from Zagreb, Croatia. The main point of influence is punk-rock mixed with hard rock, heavy metal and reggae, whereas the folk elements can be heard in the way the songs are sang and in the guitar melodies that sound like the “shepherd’s rock”. In their work Brkovi show an hommage to that generally known saying in ex-Yugoslavian pop culture which perfectly depicts the truly social state when a person is on the rural side at the same time as on the rock ’n’ roll concrete. The band came to life when two groups from Zagreb fell apart. Antifrik and Abrakha-dub-r gave four members to the new band and the story started when the vocalist Igor Flajhara Giga joined them all. Giga left the band in 2006 and the year after Shamso 69 joined the crew which ment the band is to start all over again using only a few songs from the old repertoire. First studio album “Punkfolkwellness" Brkovi recorded in 2009 and it was self-published. Even though the sales numbers were not high at all, and CDs were only sold on their concerts, the social media recognized Brkovi whose songs became viral hits. That made the band decide all of their albums are going to be given as free downloads through their own website. In 2010 Brkovi already made the second album "Društvo brkatih mladića” (translated as “The Society Of Young Men With Moustache”). The new work launched them on an ongoing tour all over Croatia and the region. End of 2010 brought new changes when the drummer Šarac had to leave the band for a while, with two replacements jumping in, one of them being the regional punk attraction Kawasaki 3p’s drummer Zoid and the other Jelen, who was a drummer for ex-Yugoslavian hit maker Jura Stublic. Jelen stays with the band until 2012 when they record their third album “Balkanski esperanto” (“The Balcan Esperanto”). That period was also marked with a big surprise - a sold out concert in Zagreb’s club Boogaloo on October 22nd 2011. The impact that Brkovi left in the region, after only four years of active band presence on the scene, became really obvious in 2013. The band published a compilation "Brkati gosti” (“Guests With Moustache”) where bands from all over the region did covers of their songs. Fourth album “Pizda materina” was recorded the year after. It was a huge success with the server collapsing a few times in just a few days after it was published and given for a free download. Two months later the album got its concert promotion in Zagreb’s best club Tvornica kulture and the show was also sold out. The same scenario followed on almost every concert in 2014. The big success made Brkovi decide to set their next concert in a sports hall Dom Sportova in Zagreb. Not a lot of bands managed to fill up that big hall but Brkovi were the first independent band with no publisher that succeeded in doing it. In cooperation with Los Angeles Agency Brkovi once again had a sold out concert, with almost 4000 people attending while at the same time the band didn’t receive any TV broadcasting or radio airplay. Summer of 2015 saw another temporary change in the band when the guitarist Prasac broke his finger. Emir Hot, a guitarist hailing from Bosnia and Herzegovina and living in London, jumped in and Brkovi recorded a new album “Torzo Dade Topića”. The concert promotion in the region began in the Serbian capital Beograd where the full big sports hall came to give support and it all continued in Zagreb with two days of fully packed Tvornica Kulture. Brkovi now continue their moustache route with all the original members coming back to the band. With concerts played all over the ex-Yugoslavian countries as well as European countries such as Bulgaria, Switzerland, Austria and Germay, Ireland. Currently working on the new material, Brkovi also plan a tour around Germany as well as home base and the neighbouring countries.