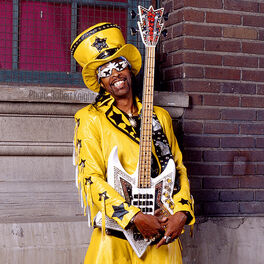 The Power of the One (Bootsy Collins)

Tha Funk Capitol Of The World

Back In The Day: The Best Of Bootsy

Stretchin' Out In Bootsy's Rubber Band

Play with Bootsy: A Tribute to the Funk

Glory B, Da Funk's On Me! The Bootsy Collins Anthology

Best Funk Of All TIme

Masters of Funk by Funk★U

For The Love Of Music

Best in the World

Rock and Roll Hall of Fame Legend Bootsy Collins is a musician, songwriter and producer. He has lent his talents to James Brown, Parliament/Funkadelic, Bootsy's Rubber Band, and Deee-Lite just to name a few. Collins's driving bass guitar and humorous vocals established him as one ofthe leading names in funk. Bootsy Collins’ influence on popular culture is inescapable. His SOUND and LOOK are literally stitched into the fabric of modern music, be it R&B, Funk, Rock, Hip-Hop or E.D.M. Snoop Dogg, Dr. Dre, Flea, Daft Punk and Thundercat are all his disciples. Today, a whole new generation of music fans have embraced Bootsy’s legacy via Childish Gambino’ platinum hit “Red Bone”, a loving homage to Collin’s 70’s smash “I’d Rather be with You.” The Power Of The One is his new album. Produced, written, and arranged by Collins, The Power of the One began before the pandemic at Sweetwater Studios and was completed during lockdown at his own Bootzilla Studios in Cincinnati. “In these tragedies and in these storms is when the most beautiful messages can come out,” says Bootsy. “You also realize you can’t do everything on your own. We need each other. One Nation under the groove.” Album Features: Christian McBride, Branford Marsalis, Larry Graham, Snoop Dogg, Victor Wooten, Christone “Kingfish” Ingram, Emmaline, Dr. Cornel West, Béla Fleck, Steve Jordan, Uché