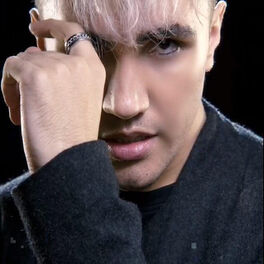 Make up Your Mind

What's up with That

Armand Joubert, also known as AJ, is a 24-year-old singer/songwriter and performing artist based in Roodepoort, South Africa. Armand is a magnificent pop-artist, who is known for his energetic performances, high notes and impeccable style. He draws his musical inspiration from artists like Jessie J, Billie Eilish, Troye Sivan and Christina Aguilera. Born in Witbank, Mpumalanga, Armand started singing at the age of 5 and has been the opening act for Prime Circle, Blackbyrd, Lady Zamar, Sho Madjozi, to name but a few. Armand was a four-chair turner on The Voice South Africa, Season 2, and made it into the Top 32. “Your voice sounds like a 5 Octave range, we’re talking Michael Jackson, Bruno Mars!” This was Karen Zoid’s reaction after hearing Armand’s rendition of Ariana Grande’s “Into You”. Armand got signed at Universal Music South Africa in 2018. This was the first big breakthrough for his career. Releasing singles Should I, So Gone (#1 on Jacaranda FM for 2 weeks) and Sun Back (#1 on 5fm) within that year before becoming an independent artist in 2019. Armand’s single, Burning Fire (March 2019) was an instant hit (exclusively released on Jacaranda FM), and his music video for the track was exclusively released through People Magazine. The release of Falling (May 2019) followed. Armand’s debut album was released on 16 August 2019 and it’s called “You’re Too Theatrical”. The first single to be released from his debut album was What Doesn’t Kill Me Better Run, AJ co-wrote this song with Marida Roux and they aimed to create a pop song with some Latin Pop elements and they did not disappoint. Armand Joubert has established himself as an out-of-box artist, who doesn’t mind pushing boundaries when it comes to his artistry. With Control (November 2019) it was no different when he dropped his single with Chad Da Don. Armand took the title for best male vocalist when he won the Grand Champion award for best senior male vocalist in the South African Championship of Performing Arts (SACOPA). He also took the overall trophy award for best vocalist in his age group, with three gold medals in Jazz, Pop and Rock. There is nothing AJ cannot achieve! But for now, he is on his way to LA to represent South Africa in the World Championship of Performing Arts (WCOPA). (April 2019) AJ went to Los Angeles to compete in the World Championships of Performing Arts (WCOPA). He walked away with the title as Best Male Contemporary Vocalist of the World. (July 2019) Armand loves to perform! His latest ABBA & QUEEN production with Elme Churr is very popular and open for bookings now. Just when things couldn’t get better for Armand Joubert, on 15 January 2020, he landed a record deal with David Gresham and the future couldn’t look brighter! His latest release featuring Nic Billington, Wish You Well (March 2020) is barely out and is already climbing the radio station charts. It seems there is nothing AJ cannot do! “I’m an artist. I’m here to express my art. I wasn’t born to fit in. Period.” – AJ