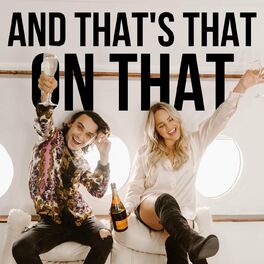 And That's That On That

Welcome to “And That’s That On That”! A monthly podcast hosted by Haley Chapman and Gavyn Bailey, two twenty-something singer/songwriters and best friends living in Los Angeles. After meeting in their early teens in their hometown of Orange County, CA, they began pursuing music...and the rest is history. Together they’ve been building their careers in entertainment ever since. Haley has worked as a publicist at multiple record labels, magazines and television/film production studios and is also an artist herself. Gavyn is a published singer/songwriter who has collaborated with established international artists such as Ray Dalton, Tim Schou, MOODY, SVEA, among others, and accumulated millions of streams and counting for his work as a co-writer. Join Haley and Gavyn as they journey through their 20’s and interview celebrity guest singers, songwriters, athletes, digital creators and successful professionals from all sectors of the entertainment industry! Tune-in the first Thursday of every month! And That’s That On That!