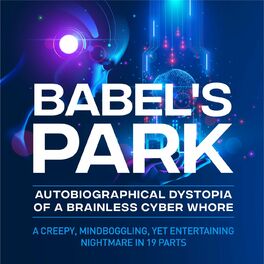 Berlin in the twenties of the 3rd millennium. At the historical film location in Potsdam-Babelsberg, where a hundred years earlier Marlene Dietrich, Ernst Lubitsch, and Billy Wilder began their legendary careers, Annette and her husband David visit the newly opened up Babel's Park. Outwardly an ostalgic theme park, it turns out that Babel's Park has become a hi-tech hotbed for cybernetic organisms, which Annette's brother Jake creates in the spirit of Frankenstein with his assistant Baby Lon. What David doesn't suspect: Annette wants to leave her terminally ill body to become immortal as a cyber whore. That was back in 1999. Since then, she has been sacrificing her virtual life lollygagging in cyberspace.Enjoy this creepy, amazing, yet entertaining radio play in 19 parts, released every Sunday.