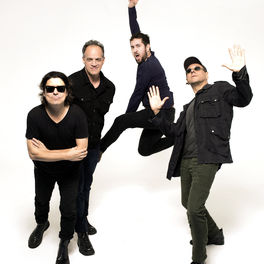 The Brazilian rock band Barão Vermelho was formed in Rio de Janiero in 1981 by two musicians, Agenor de Miranda Araújo Neto (better known as Cazuza) and Roberto Frejat. Neto was a gifted lyricist and also happened to be the nephew of a senior executive at one of Brazil's largest record companies, a factor which helped the band secure their first record deal.

Initially, the band had trouble breaking into the Brazilian market due to mainstream radio refusing to playlist the band's material. Eventually this situation resolved itself when Neto was cited by the famous Brazilian guitarist Caetano Veloso as one of 'the greatest poets of his generation' and released a cover of one of the band's songs.

Having gained the acceptance of the Brazilian musical establishment the band went from strength to strength and after being invited to record the soundtrack for the film 'Bete Balanço' (1984) the band established themselves as one of Brazil's premier rock bands.

Neto left the band in 1985 after the release of their third album and died a few years later in 1990 leaving Frejat to take over the role of vocalist. Since their recording debut in 1982 the band have recorded 19 albums, their most recent being 'Viva' released in 2019.