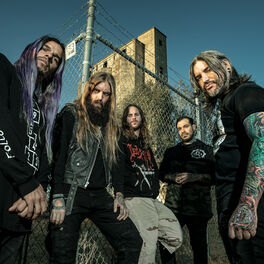 You Can't Stop Me (Bonus Version)

No Time to Bleed

Suicide Silence are an American deathcore metal rock band who formed in southern California in 2002 with vocalists Mitch Lucker and Tanner Womack, guitarists Chris Garza and Rick Ash, bassist Mike Bodkins and drummer Josh Goddard. Womack soon departed, Ash left in 2005, Goddard in 2006 and Bodkins in 2009 and Lucker died in 2012. The recent line-up has featured Garza, drummer Alex Lopez who joined in 2006, bassist Dan Kenny who came on board in 2009 and vocalist Eddie Hermida who joined in 2013 but who announced a hiatus in 2018.