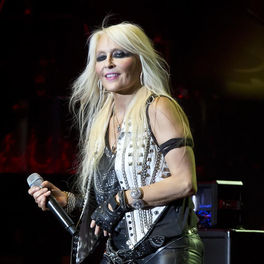 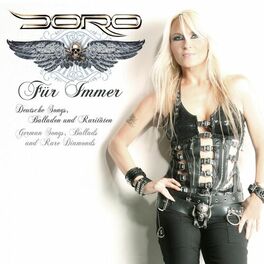 Raise Your Fist in the Air

Doro with The Classic Night Orchestra

At a time when female rock stars were incredibly scarce, Dorothee Pesch blazed her way from playing Germany's chaotic underground scene to filling stadiums with some of the major acts of the 1980s and became recognised as one of the great queens of European heavy metal.

Born in Dusseldorf, she grew up singing along to Little Richard songs with her truck driver father, but fell in love with glam rock in her teens and later discovered the hard, black thunder of Led Zeppelin and Iron Maiden. She studied to become a graphic designer but was drawn into the music scene, first as a roadie and then with first band Snakebite, and made her name as the striking, charismatic front woman of metal wailers Warlock. Amidst a sea of grizzly metal and rowdy punks, Pesch was a unique sight with her blonde bombshell looks, bellowing lungpower and swaggering confidence, and the band grew from playing dingy bars to supporting Judas Priest and Megadeth. They also became the first female fronted group to play the iconic Monsters of Rock festival in England. A legal dispute meant that Pesch lost the rights to the name Warlock, but she continued on with the remaining band members as Doro and reached number five in Germany with 'Force Majeure' in 1989.

With a new line-up, self-titled album 'Doro' was partly produced by Kiss star Gene Simmons and the band evolved with the times into glossy, glam-metal showstoppers with a flamboyant image and soaring pop choruses. She changed direction by heading to Nashville and working with local musicians on the slow, sparse, fantasy rock album 'True at Heart' and later won an MTV Europe Video Music Award for single 'Bad Blood'.
But the explosion of the grunge scene changed fashions and saw a decline in popularity of the spandex-clad, hair metal crowd. She got back to top form with the 2000 album 'Calling the Wild' which featured guitarists Slash, Al Pitrelli and Mario Parillo and songs written and produced by Motörhead's Lemmy and Andreas Bruhn from Sisters of Mercy, and they toured the US for the first time in a decade.

Later albums such as 'Fear No Evil' and 'Raise Your Fist' were more unashamed celebrations of the classic, overblown glam metal sound, and Pesch won the Metal Hammer Magazine Golden God Legend Award in 2013 and marked 30 years in the business with a two-day concert in her hometown in 2014. Still revered as an influential female rock star who kicked down many doors, Pesch released her 20th album 'Forever Warriors, Forever United' in 2018 featuring Johan Hegg from Swedish black metal growlers Amon Amarth.