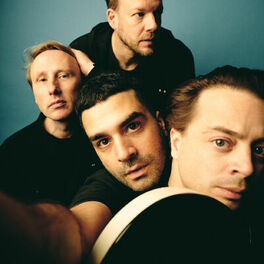 The Wolf & the Goose

Bring the Clips in (feat. Goose)

How It's Done (feat. Goose & Cyhi The Prynce)

Recently described by The Guardian as an ‘onstage powerhouse, successfully bridging the gap between electronic music and rock’, GOOSE has continued to make big waves – seven years after the release of its much-hyped debut album Bring It On (2006) on Skint Records. Their second album Synrise (2010) not only saw the band working with Peaches (on the highly addictive title track), they also enlisted legendary Pink Floyd designer Storm Thorgerson to create the artwork. The third album Control Control Control (2012) was recorded live in the studio by Paul Stacey (Noel Gallagher) and Dave Sardy (Oasis, ZZ Top) and released on GOOSE’s own label Safari Records. The album got a glowing reception and was recently chosen electro album of the month by Mixmag. After more than 400 concerts around the globe, their stage talent is well known. Only the truly great manage to sell out the Ancienne Belgique three nights running, as GOOSE did in February 2013. Willing to offer more than just a concert, GOOSE refines each performance by creating a true experience of music, lights and loads of energy.