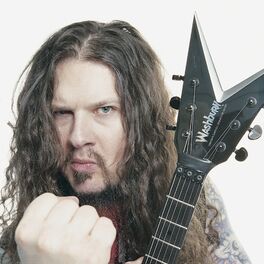 The Best of Pantera: Far Beyond the Great Southern Cowboy's Vulgar Hits

Originally calling themselves Pantera's Metal Magic, Texan brothers Darrell and Vincent Abbott formed Pantera in 1981 and went through various members before settling on a regular line-up with Terry Glaze as lead singer and Rex Brown on bass. They made their mark on the heavy metal circuit on support tours with Stryper, Dokken and Quiet Riot, releasing their debut album Metal Magic on their own label in 1983. Like most of their early material it was heavily influenced by glam rock, before they evolved their own heavier "groove metal" style, a development that saw Terry Glaze replaced as lead singer by Phil Anselmo, and Darrell Abbott turn down an offer to join Megadeth to lead Pantera's run of success through the 1990s. Their first major label album Cowboys From Hell (1990) reached Number 17 in the US album charts and the ultra-heavy and highly influential 1991 album Vulgar Display Of Power album, including their most famous tracks Mouth For War, Walk and This Love, was even more significant. Abbott re-branded himself as Dimebag Darrell and Pantera became one of heavy metal's most revered outfits. With Anselmo forming his own band Down, and Pantera launching their own offshoot band Rebel Meets Rebel, the band split in 2003 despite their final album Reinventing The Steel (2000) being one of their most successful. The Abbott brothers formed a new band Damageplan but in 2004 tragedy struck when Dimebag Darrell was shot dead on stage by a demented fan. Artist biography compiled by BDS/West 10. All rights reserved