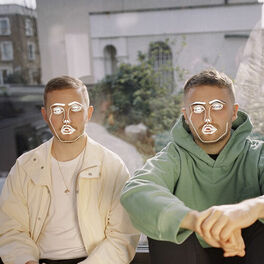 Holding On (The Remixes)

Charged with reinventing the UK's 2 step garage scene and bringing dance music back into the pop charts, brothers Guy and Howard Lawrence quickly became the soundtrack to a new generation of club kids. Brought up on 1980s soul and pop, the Surrey siblings started posting tracks online in 2010 when Howard was still only 15, and came to recognition when their remix of Jessie Ware's Running became an underground hit. Inspired by 1990s funky house beats and soulful melodies, they stood out from the dubstep craze and crossed over into the mainstream with infectious singles Latch (featuring Sam Smith) and UK Number 2 anthem White Noise (featuring AlunaGeorge). You & Me brought them their second Top 10 hit, while debut album Settle (2013) topped the UK chart and drew huge critical acclaim that included comparisons with Daft Punk, Rudimental and Chase and Status. The duo topped their breakthrough year with performances at Glastonbury Festival and Ibiza superclub Space, as they succeeded in creating commercial electro pop that recalls some of dance music's golden eras.