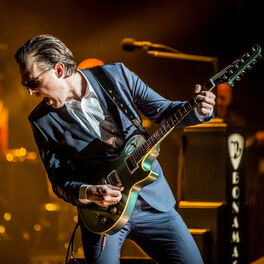 Easy To Buy, Hard To Sell

by The Sleep Eazys, Joe Bonamassa

Live At The Sydney Opera House

Live at the Greek Theatre

The Ballad of John Henry

A brilliant guitar prodigy who opened for B.B. King when he was just 12-years-old, Joe Bonamassa quickly established himself as a master guitarist and one of the leading blues musicians of his generation. Raised in New York, he first started playing guitar at the age of four, and was soon giving renditions of Stevie Ray Vaughan and Jimi Hendrix songs, performing in local bars and being mentored by rockabilly hero Danny Gatton.

After cutting his teeth with Bloodline, Bonamassa released his debut solo album 'A New Day Yesterday' in 2000 featuring Gregg Allman to great acclaim. A natural successor to the likes of Eric Clapton, Jeff Beck and Rory Gallagher, he topped the US Blues Charts seven times, thrilling with his searing renditions of the Delta Blues songbook and his own contemporary compositions. Bonamassa went on to play at the Royal Albert Hall, reach number two in the UK Charts with his eleventh studio album 'Driving Towards the Daylight' (2012) and perform with a host of his guitar heroes, while also playing with the supergroup Black Country Communion.

In 2013 he was nominated for a Grammy Award with Beth Hart for their collaborative album 'SeeSaw'. Although unsuccessful with the award, the album topped the Billboard Top Blues Albums Chart and led the way to his next solo offering, 'Different Shades of Blue'. The album gave him another number one on the Blues Chart and a number eight on the Billboard 200. He was awarded a Blues Music Award in 2015 and in 2018 he made his debut at the Grand Ole Opry in Nashville where he performed alongside Chase Bryant on his song 'I Need a Cold Beer'.