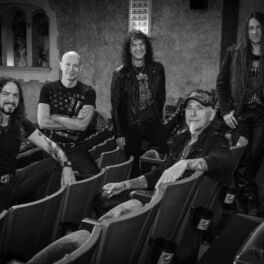 The Rise of Chaos

Blood of the Nations

Balls To The Wall

Heavy metal band Accept were one of a number of German rock bands who rode the crest of the MTV wave in the 1980s. Guitarist and founding member Wolf Hoffman had recently been augmented by Herman Frank, and the two Gibson-wielding axemen created an image which was made for the video generation. The single 'Balls to the Wall' taken from the album of the same name launched the band on to the international stage and for a brief period the band enjoyed some mainstream commercial success.

The group can trace their roots back to 1968 when lead vocalist Udo Dirkschneider formed Band X, later changing the name to Accept. In 1981 they joined Judas Priest on a world tour and their career took off. Throughout their 40-year history Accept have been plagued by line-up changes and this has continually hampered their development. In 2014 the band, after reforming yet again released the album 'Blind Rage' which surprised music critics by going straight to number one in Germany making it their most successful recording to date. Shortly afterwards Herman Frank quit the band for the third time and the next day drummer Stefan Schwarzman followed suit. Both players have since been replaced and Accept continue to tour and record.