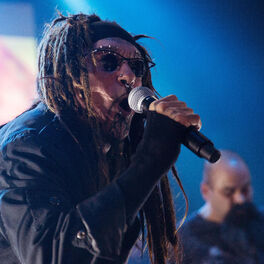 From Beer to Eternity

Taking the abrasive, early synth and electronic experiments of new wave, white noise provocateurs Throbbing Gristle and the rage of hard rock acts such as Black Sabbath and Sepultura, Al Jourgensen's Ministry pioneered an unrelenting thrash approach that has become known as industrial metal. Initially started as an outlet for Jourgensen's electro pop digital soundscapes, things changed for the band when multi-instrumentalist Paul Barker joined and added driving, distorted guitars and a new intensity to seminal third album 'The Land of Rape and Honey'. Barker remained a constant in the band's continually revolving line-up and by Jorgensen's side as their sound became ever darker and more political.

The backing of MTV for top 20 hits 'Jesus Built My Hotrod' and 'N.W.O.' helped break their 1992 fifth album 'Psalm 69' to a mainstream audience, with its 1996 follow-up 'Filth Pig' reaching number 19 in the Billboard Charts. A ferocious live force, Ministry once toured with a steel fence covering the front of the stage, which fans would climb up before hurling themselves back into the crowd. Despite drug problems they continued until 2008, releasing 13 studio albums and proving a huge influence on bands such as Depeche Mode, Nine Inch Nails and Korn.

In 2011 a documentary titled 'Fix: The Ministry Movie' was released, detailing the band's highs and lows. After a lawsuit between Jourgensen and the film-maker over the original contract which gave Jourgensen say over the final cut, the film was released just for a private screening at the Music Box Theater in Los Angeles. Later that same year, the band announced that they were reuniting to perform at Germany's Wacken Open Air Festival in 2012.

On 23rd December 2012, while on stage performing with his other band Rigor Mortis, guitarist Mike Scaccia suffered a heart attack and died. Despite fears of the band breaking up once more after Jourgensen stated that he didn't want to continue without Scaccia, he vowed to complete the unfinished songs that the pair had written before his death. These tracks were released as the album 'From Beer to Eternity' and released in 2013. Five years after Scaccia's death, Jourgensen announced that he was back in the studio working on Ministry's 14th album 'AmeriKKKant'. The album was released in 2018 and features collaborations with DJ Swamp, Lord of the Cello and Arabian Prince from N.W.A.