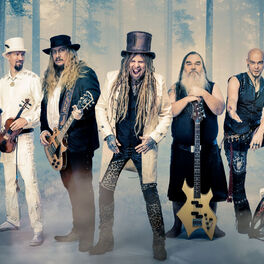 Live at Masters of Rock

Spirit of the Forest

Tales Along This Road

The Finnish folk metal group Korpiklaani began life as Shamaani Duo, a folk group formed by vocalist Jonne Järvelä. The band were then renamed Shaman in 1997 before eventually settling on Korpiklaani, a name they adopted in 2003. The group have undergone numerous personnel changes over the years, with only Järvelä and drummer Samu Ruotsalainen remaining from the original line-up.

The band's sound relies heavily on Järvelä's distinctive 'yoiking' vocals, a style which originates from traditional Finnish native Sámic music. Korpiklaani are unusual within the folk metal genre in that they started out as a folk group who later adopted metal as a component of their music. The band have released 13 studio albums, many of which feature Finnish language lyrics.