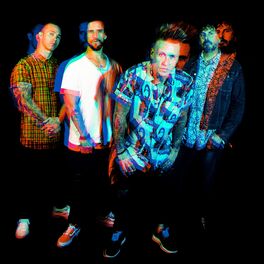 Who Do You Trust?

Time For Annihilation: On the Record & On the Road

To Be Loved: The Best Of Papa Roach (Explicit Version)

Getting Away With Murder (Expanded Edition)

Getting Away With Murder

Combining hard rock with rap in the 1990s, Papa Roach developed into one of the most successful driving rock bands of the 2000s. The band had their beginnings in 1993 when Jacoby Shaddix met drummer Dave Buckner at a High School football game in Vacaville, California and ended up talking about music. They formed a group to enter a school talent contest and took their name from Shaddix's step-grandfather Howard William Roatch, who was known as Papa Roatch. They made their first recording - an EP titled 'Potatoes for Christmas' - in 1994 and followed it with their debut album 'Old Friends from Young Years' three years later, establishing a growing reputation on prestigious support tours with the likes of Incubus and Static-X. However, it was their more melodic 2002 album 'Lovehatetragedy' that established them as a major international force, following it with 'Getting Away With Murder' in 2004 and the hit single 'Scars'. In 2008, the band's co-founder Dave Buckner was replaced on drums by Tony Palermo and they returned to the front line in 2009 with the album 'Metamorphosis'. In 2010 their former record label Geffen Records released an album of Papa Roach hits titled '...To Be Loved: The Best of Papa Roach', but the band urged their fans to boycott the record stating that they were making no money from the sales. 'Time for Annihilation', 'The Connection' and 'F.E.A.R.' followed over the next few years, with 'Crooked Teeth' coming out in 2017. Artist biography compiled by BDS/West 10. All rights reserved