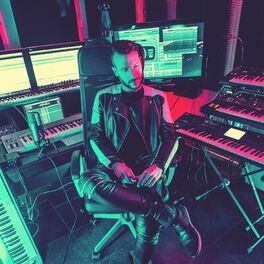 Starlight (Could You Be Mine)

Who's Your Daddy Remix Package 2

Who's Your Daddy Remix Package 1

I am not from France

Some artists look toward the future. Don Diablo dictates it. Don Diablo is one of dance music’s perennially pioneering forces. He was recently named the “#1 most-played producer” on 1001 Tracklists and is called “Future House’s Founding Father” by EDM.com. In 2018 he made the power move up to #7 on the coveted Top 100 by DJ Mag. An indisputable phenomenon, Don regularly averages upwards of 8.5 million monthly listeners on Spotify, making him one of the platform’s “Top 300 Most-Listened to Artists” with over half-a-billion streams to date. On YouTube, he has over 1M subscribers and views of his videos impressively exceed over 1.2 billion, placing him in the same league as titans across all genres of music. Avowed by his peers, superstars such as of Rihanna, Ed Sheeran, Chainsmokers & Coldplay, Kygo, Martin Garrix & Khalid, DJ Snake & Justin Bieber, Bastille, Madonna, Birdy, MØ & Diplo and more have sought him out for his high-profile remixes. Meanwhile, the likes of Gucci Mane, Diplo, Emeli Sandé, Calum Scott, Ansel Elgort, Kelis, Alex Clare, Dragonette, A R I Z O N A and Tiësto have all jumped at the chance to collaborate with Don, including on his 2018 full-length, FUTURE, which has amassed over 250M streams. Billboard proclaimed it “radiates positivity with 16 massive tracks.” Now in 2019, he breaks the mold and pushes boundaries yet again. Following hot on FUTURE’s heels, Don’s debut single for Casablanca Records, “BRAVE” [feat. Jessie J], ascends to heavenly heights. Backed by his signature future house production, the track packs just as much power as Jessie J’s bold, brassy, and booming delivery. It builds from intimate verses into an engaging empowering refrain impossible to shake. It proves perfect for the dancefloor and primed for stadiums. A packed global tour schedule sees him playing in excess of 150 live shows a year, taking to the main stage of renowned festivals Tomorrowland, EDC, Creamfields, and Lollapalooza in addition to selling out his own shows in major venues throughout the US, UK and Europe—including his biggest headline show thus far at AFAS Live in Amsterdam this past December. Launched in 2015, Don’s record label “HEXAGON” won Best New Label on Beatport for having the most Top 10 records in its first year, while Don has also been credited as the “best selling house & future house artist of all-time” on Beatport. His HEXAGON Radio show is currently broadcast in over 35 countries globally and holds a weekly Top 10 position in the iTunes podcast section every week as it reached millions of people across the planet. The talented Dutchman has further demonstrated his legendary creativity through his film and cinematography work. He notably produces and directs all of his own music videos. In 2017, he scored the title song for an international sci-fi film entitled Kill Switch. In the past, his music has appeared in series ranging from CSI to Teenwolf. Warner Brothers enlisted him to create the worldwide theme song for the much-acclaimed Batman Arkham Origins game. The track and accompanying video emerged went viral, racking up millions of YouTube plays and global hype. This multi-hyphenate continues to make a name for himself in the world of fashion with the October 2018 debut of his collaboration with Disney: a Star Wars x Hexagon capsule collection presented alongside his self-designed HEXAGON clothing line at internationally renowned Amsterdam department store, de Bijenkorf, where previous capsule collections have been created by Louis Vuitton and Balenciaga. With more music and touring throughout 2019, the future belongs to Don Diablo.