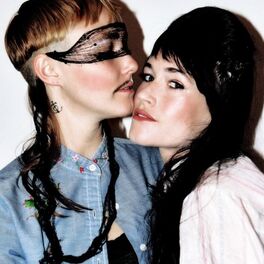 Put the Shine On

The Adventures of Ghosthorse & Stillborn

Lamb and the Wolf

We Are On Fire / Tearz For Animals

God Has a Voice, She Speaks Through Me

by Chance the Rapper

Sisters Bianca and Sierra Casady are American folk music performers whose music has electronic, pop and world influences. Vocalist, guitarist and harpist Sierra was born in Iowa and singer and percussionist Bianca was born in Hawaii. Their mother, artist and singer Christina Chalmers, divorced from their father, moved around a lot while they were growing up and in 1998 Sierra relocated to Paris, France. After her sister joined her there, they recorded their debut album 'La Maison de Mon Rêve' in 2003. Another album, 'Noah's Ark', followed in 2005 and in 2007 'The Adventures of Ghosthorse and Stillborn' went to number 23 on Billboard's Heatseekers Albums Chart and number 46 on the Independent Albums Chart. 'Grey Oceans' (2010) and 'Tales of a Grasswidow' (2013) both reached number 13 on the Heatseekers Chart. Their most recent release was 'Heartache City' in 2015.