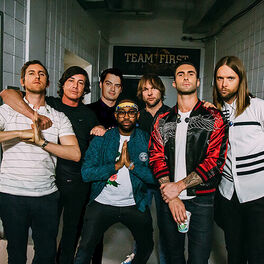 Hands All Over (Revised International Deluxe)

It Won't Be Soon Before Long

Call And Response: The Remix Album

It Won't Be Soon Before Long (International Version)

Maroon 5 are a Grammy Award-winning American rock band hailing from Los Angeles, California. Formed in 1995, they enjoyed mainstream success when their debut album 'Songs About Jane' went gold, platinum and triple platinum in many countries around the world - following increasing airplay on the radio from early singles such as 'Harder to Breathe' and 'This Love'. Maroon 5 toured on the back of this fledgling success from 2001-2006, playing sets alongside The Rolling Stones and John Mayer. However, this exhaustive touring soon took its toll upon drummer Ryan Dusick, who left the band in 2006 following a string of wrist and shoulder injuries, and he was replaced by Matt Flynn.

After a brief hiatus, the band returned in 2007 with 'It Won't Be Soon Before Too Long' which sold over 3.5 million copies worldwide. They continued to tour throughout 2007, embarking on a tour of North America alongside The Hives, followed hot on the heels by a World Tour with New Found Glory. Following an acclaimed remix album 'Call and Response' featuring remixes from renowned DJs such as Tiesto, Pharrell Williams and David Banner, the band went on another tour in March 2008 with the Counting Crows.

Their third studio album, 'Hands All Over', was released in 2010 debuting at number two on the Billboard 200. The following year the album was re-released to include the hit single 'Moves Like Jagger' featuring Christina Aguilera. Keyboardist Jesse Carmichael announced he was taking a break from the band in 2012, meanwhile they continued to work on their fourth album 'Overexposed'. After extensive touring and several festival appearances, Maroon 5 welcomed back Carmichael after a two-year break and they began recording their fifth album 'V', which debuted at number one on the Billboard 200. 'Sugar' was the biggest single off 'V' charting at number two on the Billboard 100 and number seven in the UK. They released an album of greatest hits in 2015 featuring all of their singles from previous albums.

'Don't Wanna Know', a collaboration with Kendrick Lamar, was released as a single in 2016 to preceed their sixth album 'Red Pill Blues' which came in late 2017.