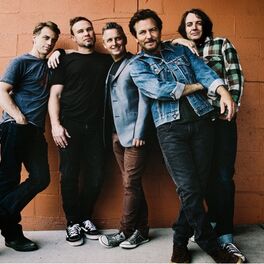 Live At The Orpheum Theater

by Surf's Up (Motion Picture Soundtrack)

Songs And Artists That Inspired Fahrenheit 9/11

Bursting out of the 1990s Seattle grunge scene, Pearl Jam harnessed the anger and disenchantment of the era to become one of the biggest rock bands in the world. Formed when former Mother Love Bone bassist Jeff Ament and guitarist Stone Gossard recruited surfing drop-out Eddie Vedder, the band were quick to follow rivals Nirvana into the mainstream with debut album Ten (1991) selling nearly 10 million copies and reaching Number 2 in the US album charts. Despite boycotting Ticketmaster and refusing to make music videos, the band's popularity has endured through two decades, with Vedder's bleak, social and political lyrics producing the chart-topping albums Vs (1993), Vitalogy (1994), No Code (1996) and Backspacer (2006). Alive, Ever Flow and Black stand as classic Pearl Jam anthems while a cover version of Wayne Cochran & the C.C. Riders' Last Kiss gave the band an unlikely hit, reaching Number 2 in the US singles chart.