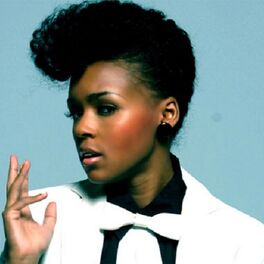 Metropolis Suite I "the Chase"

That's Enough (from "Lady and the Tramp")

I Like That (Easy Star All-Stars & Michael Goldwasser Reggae Remix)

Janelle Monae's original plan was to pursue a career as an actress, moving from Kansas to New York to study theatre at the American Musical and Dramatic Academy. The lure of music soon overtook her, however, as she moved to Georgia and founded the Wondaland Arts Society as an outlet for likeminded young performers. In 2007 she issued her first release 'Metropolis', an ambitious concept EP that included the hit 'Many Moons' and saw her signed to P. Diddy's Bad Boy label. She further built her reputation on tour with No Doubt before releasing her 2010 follow-up to 'Metropolis', 'The ArchAndroid', a full-length concept album with futuristic themes centred round the android character Cindi Mayweather. It also included the hits 'Tightrope' with Big Boi and 'Cold War' and, enhanced by some exotic promotional videos, Monáe established herself as one of the most colourful artists of the day.

Her second album, 'The Electric Lady', was released in 2013 as a follow-up to 'The ArchAndroid', forming the fourth and fifth parts of her seven-part 'Metropolis' series. In 2014 she became the inaugural recipient of the Harvard College Women's Center Award for her achievement in and contribution to arts and media as an artist and active feminist. 2015 saw the release of 'Wondaland Presents: The Eephus', a five-song collaborative record with rappers Jidenna, Roman, St. Beauty and Deep Cotton, released on Monáe's own label Wondaland. This was followed by her big screen acting debut in the blockbuster 'Moonlight' in 2016 where she starred alongside Naomie Harris and André Holland. She also starred in 'Hidden Figures' in 2016 with Octavia Spencer and Taraji P. Henson.

Although concentrating on her acting, Monáe has continued to work on new music, releasing her third studio album 'Dirty Computer' in 2018.