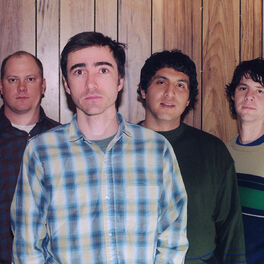 Name For You (Flipped)

The Waltz Is Over

by Yo Gabba Gabba

IF SHINS ALBUMS COULD TALK: A STORY IN 3 PARTS ix. Introduction Our story begins in Albuquerque, NM, in 1996. Brought together by a genuine love of pop music – and subsequent eschewal of college aspirations – singer/guitarist James Mercer, drummer Jesse Sandoval, keyboardist Marty Crandall and bassist Dave Hernandez formed The Shins. Mercer had taught himself to play the guitar as a teenager, while listening to bands like My Bloody Valentine and Echo & The Bunnymen. With time, he developed a more pronounced interest in ‘60s pop and the art of well-crafted songwriting. Mercer’s aesthetic, paired with the like-minded sensibilities of his bandmates, gave rise to this most friendly troupe of disbelieving pop heroes. And little did they know, The Shins would soon provide ample shit to hit the proverbial fan. After seeing the band’s San Francisco show (in the midst of their tour opening for Modest Mouse), Sub Pop CEO Jonathan Poneman was smitten. And in 2001 – The Shins spoke their very first words. I. Oh! Inverted World 2001’s Oh! Inverted World hurtled towards jaded, unsuspecting music fans at warp speed. The Shins’ unique pop sensibility was fresh, immediate, weird and exquisite – a cacophony of melodic intricacy tempered by a quirky, childlike enthusiasm. Recorded mostly in Mercer’s loft and Crandall’s basement, it became the little album that could – and would – turn indie-rock on its head. The Shins had arrived. II. Chutes Too Narrow If Oh! Inverted World came directly at you, then 2003’s Chutes Too Narrow kindly invited you in. In 2002, Mercer and Sandoval relocated to Portland, with Crandall soon to follow. In the summer of 2003, they started tracking new songs in Mercer’s basement studio – this time with Phil Ek (Built to Spill, Modest Mouse) at the mixing board. A bigger, bolder production aesthetic took everything up a notch and – alongside more adventurous and sophisticated songwriting – polished an already golden egg. Then came Zach Braff’s witty treatise on love and lithium, the 2004 film Garden State. The movie featured The Shins’ “New Slang” prominently alongside Natalie Portman and took the band to a whole new level of popularity. III. Wincing the Night Away To play music for a long time, you have to surprise the people that love you – while also surprising yourself. Enter Wincing the Night Away. Recorded over time in Mercer’s basement studio, Phil Ek’s Seattle digs, and in Oregon City with veteran producer Joe Chiccarelli (Beck, U2) – Wincing the Night Away is a whole new animal. It is the sound of a band growing up and out. Mercer’s infectious, indelible melodic style is still at the core, and unfaltering. But anything can happen around it – and in this case, it does. Channeling a Morrissey vibe, “Sea Legs” pairs a hip-hop (yes, hip-hop) beat with lush melodic lines and searing guitars. Elsewhere the band toys with tweaked-out piano steeped in psychedelic strings (“Red Rabbit”); fractured synth samples (“Spilt Needles”); gauzy, arpeggiated keyboards cloaking thunderous anthems (“Sleeping Lessons”); and, taking cues from early Jesus and Mary Chain albums – sweeping, fuzztoned epics (“Phantom Limb”). Finally, “Turn on Me,” “Girl Sailor” and “Australia” are the lilting, exhilarating, rollicking, rock-solid pop songs we’ve all come to covet from The Shins. So have a listen. And consider yourself surprised.