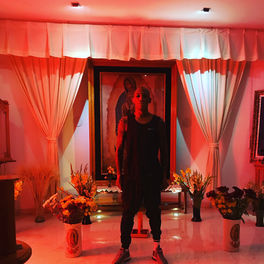 A Ruff Guide To

Bristol-born Adrian Thaws rose to prominence through his work as a rapper going under the name of Tricky and performing with the acclaimed trip-hop band Massive Attack. Thaws featured on the band's debut album 'Blue Lines' released in 1991 before striking out with his own solo project recording the album 'Maxinquaye' which featured his then girlfriend, vocalist Martina Topley-Bird. The album, named after his mother Maxine Quay, proved to be pivotal in Thaw's career. Unshackled from the limited role he had played in Massive Attack, a solo album allowed Thaw to explore and integrate a wide variety of influences into his music. It went on to sell half a million copies which significantly elevated his standing within the hip-hop genre.

Alongside his performing and recording commitments Thaw has also been involved in acting and film work. His distinctive appearance has helped win him roles as a character actor and he played a sizeable acting part in the Luc Besson film 'Fifth Element'. Although he has never repeated the commercial success of 'Maxinquaye', Thaw has maintained an artistic consistency throughout his recording career and has worked on collaborations with some major stars including Cyndi Lauper, Grace Jones, INXS and Alanis Morissette. He released his 13th studio album in 2017 titled 'Ununiform'.