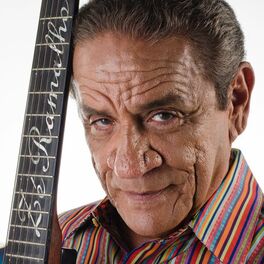 by Os Paralamas do Sucesso

The Brazilian singer, songwriter and guitarist Zé Ramalho has a career spanning more than four decades and is one of the most distinctive and recognisable performers in Brazilian popular music. He was born José Ramalho Neto in 1949 and raised in the city of Campina Grande. Neto cites influences such as the Rolling Stones, Pink Floyd and Bob Dylan and plays in a style which combines rock with the more traditional styles of Brazilian music such as forró.

His debut album was 'Paêbirú' released in 1975, a collection of 14 songs recorded in conjunction with the late Lula Côrtes and after the album came out Neto decided to move to Rio de Janeiro to pursue his musical career. After enjoying a successful decade of popularity during which he released a further six critically acclaimed albums, Neto's career then went into decline for a number of years until the release of his eleventh album 'Brasil Nordeste' in 1991 which restored his status as one of Brazil's premier artists.

During the latter part of his career Neto has been involved in a series of high-profile collaborations including a much publicised performance at Rock in Rio in 2013 with Brazilian heavy metal band Sepultura and a collaborative album with the guitarist Fagner released in 2014.