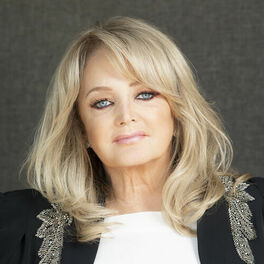 The Best is Yet to Come

Between the Earth and the Stars

Playlist: The Best Of The EastWest Years

The Very Best of Bonnie Tyler

Faster Than the Speed of Night

When the Lights Go Down

The Very Best of Bonnie Tyler

Recognised for her distinctive raspy voice, Bonnie Tyler’s performing career began in 1969 after she entered a talent competition at the local rugby club in her hometown of Skewen. She has released eighteen studio albums and is recognised as one of Wales’ best-known recording artists. She cites Tina Turner and Janis Joplin as her greatest influences. With her career-defining 1983 single "Total Eclipse of the Heart", Tyler became the first and only Welsh artist to score a no. 1 on the Billboard Hot 100. She was also the only female soloist to score a UK no. 1 that year. The song features on her Grammy-nominated album, Faster Than the Speed of Night. In the 80s, Tyler recorded several songs for blockbuster movie soundtracks, including "Holding Out for a Hero" for Footloose and the Grammy-nominated "Here She Comes" for Giorgio Moroder's restoration version of Metropolis. In 2013, Tyler represented the UK at Eurovision with "Believe in Me" from her critically acclaimed album Rocks and Honey. She recently celebrated her 50th year as a seasoned international performer with the release of Between the Earth and the Stars, featuring guest vocals from Rod Stewart, Cliff Richard and Status Quo's Francis Rossi. Tyler is also a passionate philanthropist, having backed charities that support the homeless, animal rights and the welfare of children. She is an ambassador of Bobath Children’s Therapy Centre and Noah’s Ark Children’s Hospital in Wales. Her latest album The Best Is Yet to Come arrived on 26 February 2021, along with its singles "When the Lights Go Down" and "Dreams Are Not Enough".