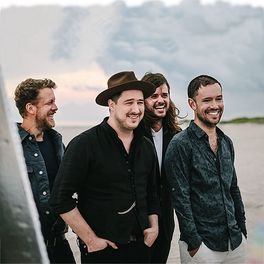 Hailing from the burgeoning London folk scene that produced Noah and the Whale, Johnny Flynn and Laura Marling, Mumford & Sons' rootsy twang and acoustic authenticity charmed indie fans whilst winning approval from folk purists. All active members and session players within the community, it was Marcus Mumford's early attempts at songwriting that focused the band into a more formal group in 2007 and with their hit 'Little Lion Man' being named Hottest Record in the World by Radio 1 DJ Zane Lowe, Mumford & Sons found themselves success around the globe.

Honing their rich harmonies and melancholic tales on barge tours of the River Thames and island hopping gigs in the Scottish Highlands, their debut album 'Sigh No More' (2009) proved a critical success, reaching number seven in the UK, topping the charts in Australia and winning a Brit Award in 2011. The band had their status confirmed in 2013 when they won the Grammy for Album of the Year for 'Babel' and the Brit for Best British Group.

After a short break, the band returned with their third studio album, 'Wilder Mind', in 2015, which topped the UK Albums Chart and the Billboard 200. They embarked on a UK tour and made several festival and television appearances before retreating back to the studio to work on their fourth record, 'Delta', which they released in 2018.